Still operational in the event of a loss of power!

Power cuts are now an increasing problem because electricity grids are sensitive to any fluctuations. Short power cuts caused by, for example, a thunderstorm or bad weather can thus sometimes occur. In these situations, it is of course very useful if you can still operate your awning by hand. Power cuts pose a particular threat to awnings fitted with an electric sun protection drive because they can no longer respond to a thunderstorm or rain and there is a danger that the awning will be damaged as a result. For this reason, Becker-Antriebe has developed the new “E33” (with electronic end switch) and “C33” (with integrated radio receiver) drive series. These series are fitted with an additional, easy-to-operate emergency manual crank so that they can also be operated normally in the event of a power cut. The awning can always be safely retracted using the crank. The series are designed for installation in properties owned by end customers and also in the gastronomy sector. Ease of use was an important focus of the development work.

Back to the end position smoothly and quickly

In comparison to older sun protection drives that could be wound using a manual crank in the event of an emergency, the gear ratio has been significantly improved. These new drives can thus reach the top end position much quicker.

The E33 and C33 drive systems from Becker-Antriebe are an ideal solution for reliable sun protection outdoors. The awning can now be wound back in almost effortlessly in an emergency. No other electronic drive system can be moved as easily by hand. Both types of drive can also independently reach their end positions once again after being operated manually without any need for them to be reprogrammed by the fitter or operator.

The new drive series are equipped with other important features that can be optionally activated. They are equipped with a convenient fabric tightening function so that you can enjoy the fabric on the awning for many years. It is important on conservatory awnings in particular that the fabric is briefly tightened again once it reaches its lower end position. The E33 and C33 drives retract the fabric a little so that it doesn’t sag and form ripples.

To further protect the awning, the drive series are also equipped with an optional cloth slackening function. After it has been fully retracted, the awning moves slightly in the opposite direction to reduce the strain on the fabric and ensure that it is not wound too tightly. In addition, the stop behaviour on both types of drive can be switched between “soft”, which is mostly required on open articulated-arm awnings, and “hard”. This ensures that the cassette on a cassette awning always remains firmly closed and the awning is reliably protected against the weather.

The E33 and C33 drives from Becker-Antriebe offer more protection to the awning. 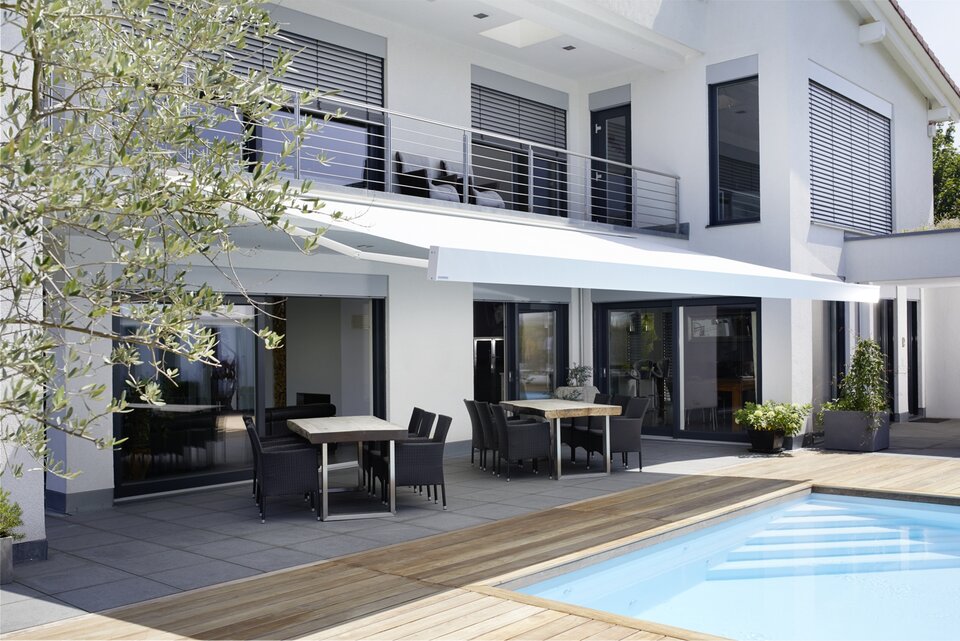 In an emergency situation, the extended awning can still be safely retracted with the E33 and C33 drives from Becker-Antriebe.

If you wish to use text and images from this section, please acknowledge the source as "Becker-Antriebe GmbH". Images from the Becker press review may only be used in connection with the corresponding press releases and must not be made freely available for download! Please contact our press office for further information.